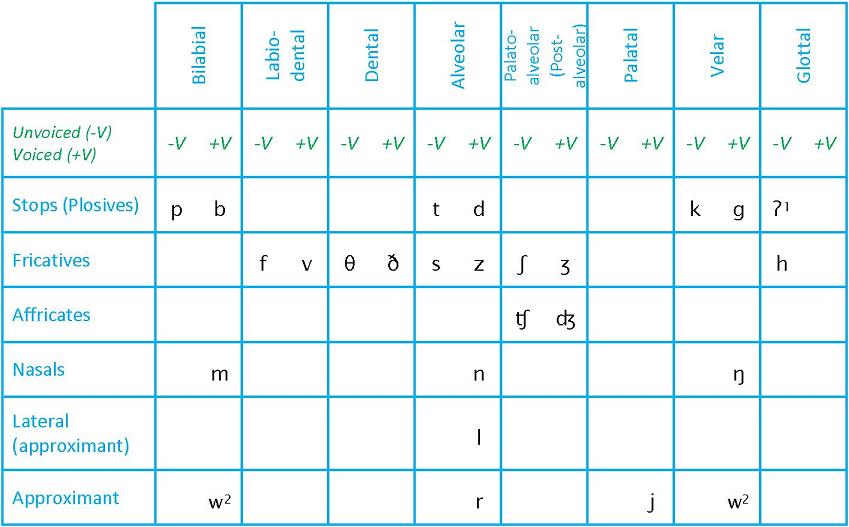 English Speech Sounds
My friends, my countrywomen... Lend me your ears. And your mouths.

It has come to my attention that some of our colleagues need a refresher on the relationships between speech sounds. Let's quickly review the sounds and then talk about why children make the errors that they make. First, when we write speech sounds (broad transcription), we use slashes to show that it is the sound and not the letter. For example, B is a letter. We say it's called bee. And /b/ is a sound. No vowel attached, just an isolated /b/.

Alveolar=bony ridge that holds the teeth. Tongue to alveolar ridge.

Palato=palate, alveolar=bony ridge that holds the teeth. Palatals or palatoalevolars = tongue to the front of the palate. Slightly behind alveolar.

Palatal=palate. Slightly behind palatoalveolar. Many people group these two areas together and call them all palatals. The tongue touches the front of the palate.

Velar=velum, which is the soft palate. It is in the middle/back of the palate. The back of the tongue touches the velum.

The stops are pretty straightforward, except perhaps the glottal stop, which is the one that looks like a question mark without the dot. The glottal stop is found in the middle of button, when your throat just closes up instead of pronouncing the /t/. Other words that may contain a glottal stop, depending on your dialect, are mountain, fountain, batten, written, and satin. (Notice the trend of substituting a glottal stop for the /t/ when it is followed by a syllabic /n/.)

Fricatives /f, v, s, z, h/ are all obvious. The dental fricatives are soft and hard "th". (Note that I do not put "th" between //, because /th/ means /t/ followed by /h/.) Soft "th," as in think, is the oval-shaped one. Hard "th," as in that, is the one with the circle on the bottom. The next oddly-shaped symbols in the fricatives row are the postalveolar fricatives. The elongated s means the "sh" sound, as in she. The symbol that looks like a 3 is the "zh" sound, as in azure, pleasure, measure, and barrage.

The first two nasals are easy, /m/ and /n/. The long-legged n means the "ng" sound, as in sing or wrong. Note that the "ng" sound does NOT contain a /g/. You may say sing and wrong with a hard /g/ at the end, but that is dialectical and would be transcribed with the "ng" symbol followed by /g/.

The lateral approximant (also called lateral liquid) is /l/. You knew that.

The other approximants are more commonly called glides /w/ and /j/, along with liquid /r/. Note that we have already covered the "j" sound--this /j/ is written in English as a "y." Words containing /j/ include year, few, yes, and cube. (Few is /fju/, cube is /kjub/.)

Stridency: One other thing to bring up is that /f, v, s, z/ "sh, zh, ch, j" share a feature called stridency. It's the turbulence you hear in that production. Fun fact: dentalized /s/ tends to sound strident, while "th" substitution for /s/ does not sound strident. Listen to your kiddos and see who has stridency despite errors.

Practice: Why did he substitute that sound?

Let's get into it now. Let's build our own metaphonological skills. I will give you the intended words first, followed by the child's production. As you go through these examples, first look for what the intended sound and error sound share. That will help you figure out why the child substituted that sound.

1. Mommy mean. = Mommy meem. Yes, I started you off easily. Why did the child substitute /m/ for /n/ in "mean"? The other /m/ sounds in the sentence pulled that alveolar nasal up to a bilabial nasal. This is an example of labial assimilation, not nasal assimilation--the target /n/ sound was already nasal.

2. I want swing = I want fing. Cluster reduction is obvious, but why /f/ substitution? Alright, /s/ and /f/ share manner of production: both are strident fricatives. /w/ and /f/ are both labial (bilabial and labiodental both count as labial). The child tried to produce the /s/ by using a fricative sound, but the /w/ pulled the alveolar sound (/s/) up to being labial (/f/).

4. That's wrong = Ba wong. Now we have an assimilation. Why did "th" become /b/? The /w/ sound (which is incorrect to begin with) is labial, which caused the "th" error to become a /b/ instead of the typical /d/.

5. I said yes = Ah deh nes. I -> ah is the vowel equivalent of cluster reduction; it is monophthongization. The diphthong I should have components ah and ee, and this child has left out the ee component. This is not an assimilation. Let's tackle the next word: said. /s/ -> /d/ is your typical stridency reduction and voicing error. /d/ -> 0 is a simple final consonant deletion, also not an assimilation. Now on to the word yes. /j/ -> /n/ is... an assimilation! Why /n/? Probably because the alveolar /d/ and /s/ surrounding it made it become an alveolar error. /n/ is resonant, as is /j/. But overall, the /j/ -> /n/ is alveolar assimilation.

7. Bathing suit = baby boot. Lots of labial assimilation going on here. Even though suit is a separate word, the /b/ sounds in "baby" influence it to become a /b/. Note that the /s/ -> /b/ error is also an example of stridency deletion.

8. Bathing suit = baby doot. Now we have two different assimilations. In bathing: "th" -> /b/ is labial assimilation. In suit: The /s/ -> /d/ error is characterized by stridency deletion and voicing error. Have you noticed that I do not tend to say stopping? It is more useful to talk about what we need the sound to be (a strident and voiceless /s/) rather than what the error sound is (stop /d/). I suppose you could call this error a stop assimilation, if there is such a thing. Probably the /t/ influenced the /d/.

9. Pretty dress = detty bets. Why /p/ -> /d/? /p/ and /d/ are both stops, so they share manner. /r/ and /d/ are voiced, which probably influenced the error to be /d/ rather than /t/. And why would we think /t/ would have been a likely error in this case? Because of the /t/ in the middle of the word. But wait, say the word... Did you really say a /t/ as you would say it in top or two? Probably not. We tend to voice /t/, making it into a /d/, when it is between vowels. Obviously /t/ and /d/ are both alveolar, which was probably the biggest influence on the /p/ -> /d/ error. Alright, so the /d/ error was influenced by the /p/ (a stop), the /r/ (voiced), and the /t/ (alveolar). Whew, now on to the word dress. Why /d/ -> /b/? We know the child can say /d/, because he just said it twice in pretty. I am betting that if the child had included the /r/ sound in dress, it would have been glided to a /w/. And /w/ is labial, as is /b/. /b/ and /d/ are both voiced stops, so they have a lot in common. I would say that this is labial assimilation. Finally /s/ -> /ts/. All those alveolar stops in "detty" may have influenced this. Also, /s/ and /t/ are both alveolar and voiceless, so it is not such a stretch. Odd to add a consonant rather than deleting it, but you know my motto: Kids are weird.

10. Tell him I said stop = Deh-ou im I deh bop. In tell: /t/ -> /d/ is just a voicing error, not an assimilation. /l/ is just vocalized, also not an assimilation. Him: deletion of /h/ is NOT AN ERROR. Oh yes, I mean it. Adults tend to delete the /h/ in the words him and her when those words are in the middle of a sentence. This is not initial consonant deletion or any kind of error, because adults say it that way. Said: /s/ -> /d/ is either influenced by the /d/ at the end of the word or perhaps just an example of metathesis. Metathesis is when phonemes switch positions in the word. "aks" for ask is a classic example. Either way, /s/ -> /d/ is also an example of stridency deletion and perhaps a voicing error. Stop: /st/ -> /b/. Let's look at what /st/ has in common with /b/. /b/ and /t/ are both stops. Umm... that's about it. But I am sure that you noticed that lovely /b/ cognate at the end of the word: /p/. Yes, this is almost certainly an example of labial assimilation. There is also a voicing error in there.

Had enough? Oh, come on, I could nerd out on phonology forever. Alright, let's call it quits for now.