Developmental norms can be a source of disagreement and are rife with misconceptions. When do children really learn to say /s/? Is cluster reduction still typical at age 4? Read on...

First, let's talk intelligibility. If you are in private practice with private pay, feel free to treat any sound at any age. The rest of us need to consider intelligibility first, and developmental norms second. So let's do that.

Quick quiz: if a child is 26 months old with speech intelligibility of 45%, is this within the typical range?
Answer: NO. This child is delayed.

Quick quiz: If a child is 4 years old with speech intelligibility below 95%, is this within the typical range?
Answer: NO. This child is delayed.

Quick quiz: If a child is 3 years old and get a standard score of 76 on an articulation test, does she need therapy?
Answer: Unknown, because tests of articulation are irrelevant.

Tests of articulation are problematic for a number of reasons.

Reason 1:
One sound in a word is judged rather than an entire word. Most speech sound disorders involve patterns, and tests of articulation do not take this into consideration.

Reason 2:
Tests of articulation measure sounds without considering phonetic context, the sounds in the rest of the word. This often results in a child looking like he cannot say a sound in a certain word position, when it was a word-specific problem or a process error. For example, why on earth would you use the word yellow to measure production of /j/ (y)? Everyone knows little kids say lellow for yellow, even if they say /j/ in yes, yeah, you, etc. Another example, why use the word window to measure production of medial /n/? If the child cannot produce consonant clusters, he will delete the /n/ or the /d/. That has nothing to do with whether he can say the sounds. Wouldn't nano be a better medial /n/ word? I know, I know, it's not a common word. How about nana? Nanny?

Reason 3:
Tests of articulation are scored by counting the number of errors the child made. Some errors have more impact on intelligibility than others. For example, given the stimulus word sun, Angel says thun, Brian says dun, and Cara says un. Each of them made one error for articulation test scoring, but it is clear that the impact on intelligibility would be different. Percentage of consonants correct (PCC) is useless for the same reason.

Reason 4:
These tests are not normed in reference to intelligibility. Let's pause and reflect... Are the questions starting? Wait, but.. no, we just talked about indiscriminate error counting, that it is folly. The test makers take the lazy way out, just counting errors and crunching stats. Can you blame them? Measuring intelligibility is a pain in the neck, as we have already agreed. But if they are not going to do it, their tests are meaningless.

There is one exception to reason 4, which is the Hodson Analysis of Phonological Patterns, Fourth Edition (HAPP-4). Rather than giving you a standard score based on the child's age, it gives you an intelligibility estimate (mild, moderate, etc.) based on the errors. It also gives you targets that would be priorities for increasing intelligibility. How handy is that? Even handier, there is a computerized version of the scoring/analysis if you buy the HCAPP-3 (Hodson Computerized Analysis of Phonological Patterns, Third Edition). Using the HCAPP-3, it takes me about 20 minutes to administer the test and another 20 to score and complete a full phonological analysis. You know I love me some Hodson.

Since Hodson's test was developed based on actual intelligibility measures in connected speech, I feel comfortable using it without doing a speech sample with full analysis. If you do not have access to it, you are stuck doing a phonological analysis on words that are not intended for phonological analysis. My sympathies are with you, but you can feel proud of yourself for not taking the easy way out and relying on meaningless scores.

When you do your phonological analysis on random words the child says (preferred) or test words (blech), how do you know whether the child qualifies for services? How do you decide what is typical?

Wow, do you guys have tomato cannons or something?

Alright, so read over the Grunwell norms, which are widely accepted (though not widely referenced properly) and are based on a series of studies. Behold: 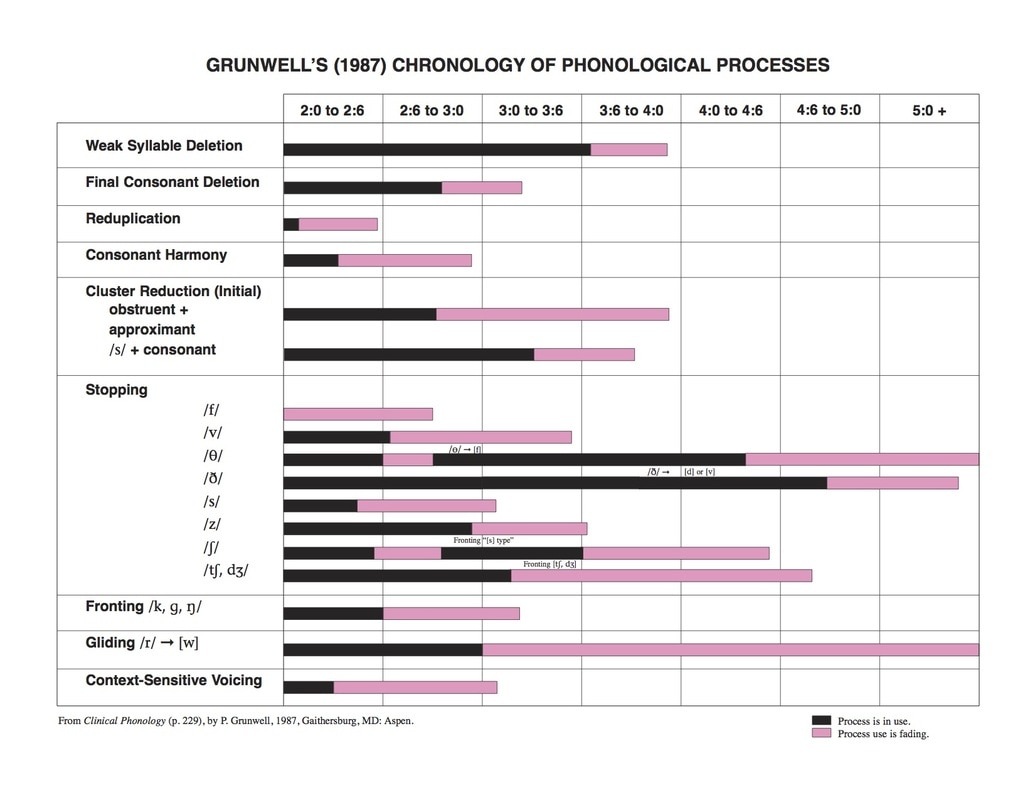 The nice thing about Grunwell 1987 is that it focused on substitutions and deletions, not on distortions. This means that all your lispers would skate through without having their eth counted ath incorrect. A dentalized /s/ is still an /s/. That's good, because we want to ignore lisps when we consider intelligibility. We do not want a minor error like that to skew the data. (If you are in private practice, by all means, tackle those lisps. That's why you get paid the big bucks.)

Let's talk about weak syllable deletion. This is talking about 3- and 4-syllable words, like saying 'tato chips for potato chips or 'jamas for pajamas. This is not talking about kids who say da for daddy or bu for toothbrush.

Consonant harmony is a biggie for our unintelligible friends. Sometimes this is the culprit despite the child saying sounds that are age-appropriate. For example, Elliott says the following:
-two -> two
-it -> it
-coat -> coke
-top -> pop
-bat -> bap
-light -> wipe (this one is a combination of gliding and labial assimilation)
You get the picture. His /t/ is not the problem. Consonant harmony is the problem.

Don't you like how they separated the two kinds of two-consonant clusters? If a child is 4:0 and says tain for train, this is a problem. If he says twain for train, he's still alright for a while, but he needs to be including two consonants, and the stop should be correct.

Now may I draw your gaze to the norm for /s/ clusters. The child should say /s/ clusters by age 3:9, and many kids are doing it at age 3:3. Oh great, now I've blown your mind again. Sorry, I have to address the first mind blowinghood by pointing out that singleton /s/ (a few lines down) is coming in around age 2:5 for many kids, by age 3:1 for just about everyone. I know, we have been sorely mislead on the development of /s/. If you would like to experience the veracity of these data, go to a 3-year-old room at a halfway decent daycare, close your eyes, and be bathed in frication.

Going back up a bit, let's notice that /f/ stopping is done by age 2:9. So if a 3-year-old tells you about his pet pish, that is not typical.

Head down to the th twins. They are fraternal twins, yes? Anyway, take a look at twin A, voiceless th. If a child is 4 and does not say voiceless th correctly, it this typical? Answer: It depends. On what, you ask with bated breath? The error, I kindly reply. If the child says pink for think at age 4, PROBLEM. If the child says fink for think at age 4, let it be. He's fine.

Check out sh. This is another line that goes pink and back to black. The original black line is for stopping, such as saying do for shoe. Stopping of sh is fading by age 2:5 and gone by age 2:10. However, Grunwell was kind enough to let us know that sh fronting to /s/ goes on until 3:6 for many kids but should be gone by 4:5. Are you looking at your Sander norms and scratching your head? Lisps were counted as errors for Sander, which depressed their normative data. Same with their /s/ data. Don't ask me how Sander got /s/ and /z/ mastered at age 8. Go into a kindergarten classroom and see how many kids are stopping these sounds. Hint: not many. And the ones who are have intelligibility issues.

Fronting done by age 3:3? WHAT??? Oh yes, my friends. Get your popsicle sticks ready.

While gliding of /r/ (not /l/) continues past age 5 in some typical kids, many are saying /r/ correctly by age 3. Pretty cool.

Alright, enough of that.

Wait, what's that you say? Your kid is 3:6 and has cluster reduction, gliding, fronting of palatals, and weak-syllable deletion, which are all listed as typical for that age (though fading)... but she is poorly intelligible. To help or not to help?

Let's talk about a little thing I like to call multiplicity of errors.

Disabilities (sorry deaf, I'm just using the word for the hearies' benefit) do not add up, they multiply. Deaf + cognitive is actually deaf x cognitive. It's the same with speech sound errors.

The norms above do not say that a child age 3:6 uses every pattern error that runs across that line. That would be less typical. Some kids make /r/ errors, some make /s/ errors, some make /k/ errors, but kids who make all of those errors? Poorly intelligible. Multiplicity of errors. And when you mix in consonant deletions and harmony, you're sunk.

A 3-year-old who says /r/ correctly might still need therapy. I had a little friend who did just that, and he is described in the case studies.

I'm sorry, I didn't mean to make you cry. I know that not everyone nerds out on phonology like I do. Let's go back to the moral of the story: Intelligibility is king. Don't get too hung up on when sounds develop and when error patterns extinguish.

Here are my recommendations for doing an evaluation:
1. Evaluate intelligibility with the parent, keeping in mind that by age 36 months the child should have just about every word understood. I suppose I should tell you to record a speech sample for this, but honestly, can't you tell the difference between "just about all" and "not just about all?"
2. If intelligibility is not where it should be, do a pattern analysis. Use the HCAPP if at all possible. It will seriously save you time. No, I do not make money off it. If your school district doesn't have it on the approved list, offer to pilot it.
3. When you have identified the patterns in error, reference the norms but do not let them control your treatment plan.

"You just said not to let the pattern norms control your treatment plan. That makes no sense."

Way to be blunt, ouch.

Go to the page called Cycles Info. It's under the Speech Pathologists tab at the top of this page. It will tell you which patterns to remediate first, so that you can build intelligibility more quickly.

Don't forget to work on metaphonological skills (MPS, I'm dubbing it). I'll make a page on it one of these days, but for now you can get the info from the Cycles Info page and this page from my old website. It has video examples: http://myspeechteacher.wikispaces.com/Metaphonological+Skills.