Jefferson had a severe expressive language disorder and a profound phonological disorder. I am writing in the past tense for consistency's sake, but as I write this intro in March 2020, I am still working with this child. Jefferson had his first visit at my private practice on September 13, 2019, and he will be three years old in May 2020. As always, his name has been changed to protect his privacy.

Here is a link to Jefferson's Cycles and percentage data: Jefferson's data. You can see exactly what Jeffie has been up to, and all the progress he is making.

In addition to taking percentage data on the production targets each session, I transcribe many of the words Jeffie says while playing. Here are some of those transcriptions. You will see that Jefferson is making terrific progress. As with all of my Cycles kiddos, Jefferson's vowel errors worked themselves out without needing to be directly targeted, and he is beginning to generalize his skills directly from word-level work. I follow Cycles religiously, because the only way to access the level of improvement seen in the research is to follow it as prescribed. Accordingly, the only target that would not be strictly word level is the phrase "It's a ____" with initial /s/ clusters when the child can say the /s/ cluster words at the word level and has not yet generalized to conversation. To be as clear: I never follow the word-phrase-sentence-structured convo-convo hierarchy, because it is unnecessary.

What follows are parts of the "O" of many of my SOAP notes, which may include Jeffie's accuracy on the target of the week, the level of prompting needed, transcriptions of his spontaneous and imitated words (not targets of the week but words produced during play, etc.), and other notes.

A word about transcription. By nature, transcription of a highly unintelligible person will reflect their best productions, because most of their words cannot be understood and, therefore, cannot be effectively paired with a word by the clinician. If the word cannot be identified, most people will not transcribe, because the helpfulness of such transcription is limited. Jeffie's transcriptions are illustrative of this, particularly Sept-Dec 2019, when his intelligibility was so poor that most of his words could not be identified. He would often just say "uh" or a single consonant. During this time frame, every intelligible word produced during the session was transcribed. As time goes on, most clinicians will tend to transcribe better words and words representing improvements, because the clinician will have heard the static errors many times. Jeffie had an intelligibility jump in late December/early January, so the transcriptions from that point on are average to slightly-better-than-average productions, but certainly I have the same tendency as others to note a new skill. Sometimes I would transcribe just a single word from a phrase, especially when intelligible words were mixed with unintelligible ones.

I invite you to contact me if you have questions. 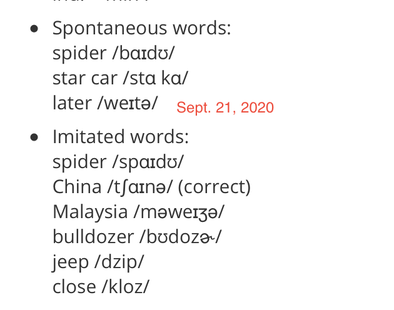